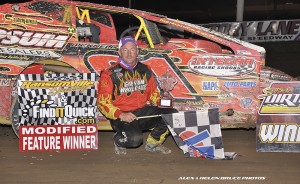 In the Gypsum Wholesalers No. 91, Decker held the lead from green to checkered flags in the Alex Friesen Summer Nationals presented by Coors Light and Randy’s Smoke Shop feature race Tuesday, Aug. 5, keeping a stout field of competitors off his tail.

“The Gypsum Wholesaler car was spot-on from the time we rolled out tonight,” said Decker, who took the Pole Position Raceway Fast Qualifier Award and won his heat race. “It really made my job pretty easy. These guys did a tremendous job preparing the car.”

Decker drew the pole position and charged to an initial lead over Matt Billings, of Brockville, Ontario. Leaders reached traffic within seven laps, but Decker darted around lapped cars with ease, making it difficult for Billings to keep up.

A lap-8 caution for Rick Richner brought the field back together for a double-file restart. Decker chose the outside lane and powered forward until the yellow flag waved again, this time for Billy VanInwegen. Again fast on the high side, Decker maintained his lead while Justin Haers, of Phelps, N.Y., found some speed on the restart, cruising past Billings to claim the second spot.

Trouble came for Decker in lap 28, with cars at the rear of the field colliding just as the leaders approached. The red lights lit for a pileup in turn 3 involving Brian Sage, of Brockport, N.Y., Justin Wright, of Piffard, N.Y., Ryan Susice, of Ransomville, N.Y., Dale Planck, of Homer, N.Y., and Robbie Krull, of Cambria, N.Y. Track crews towed to the pits Rich Scagliotta’s Adamsville Maintenance Inc. No. 8s with significant damage, but Decker and Haers were able to drive away from the wreck and restart at the front.

When the field returned to green, Decker kept his lead over Haers while Stewart Friesen, of Niagara-on-the-Lake,  Ontario, gained position over Billings to ride in third. Danny Johnson, of Rochester, N.Y., had made it to seventh from his 11th place starting spot and was steadily progressing through the pack.

By lap 58, Johnson was battling Friesen for third and charged past him on the front stretch. Matt Sheppard, who started 28th after mechanical issues in qualifying rounds kept him from completing his heat race, had cracked the top 10.

A right rear flat on the Gypsum Express, Ltd. No. 99L driven by Larry Wight, of Almar, N.Y., brought caution to the race track in lap 68. Johnson flew past Haers at the restart for second and set his sights on Decker in first.

The two leaders sped ahead, leaving Haers and Friesen battling behind them for third. Haers had the advantage, but the Westmoreland Golf Club No. 1wcg was bumper-to-bumper with the Phelps Cement Products No. 3 on the straightaways and raced him wheel-to-wheel in the turns. In lap 81, a hard charging Matt Sheppard joined the fray, attempting to pass Friesen before a lap-82 yellow slowed his advance.

The three-way battle for third continued at the lap-82 restart. Sheppard dove the FX Caprara Car Co. / Heinke-Baldwin Racing No. 9h in turns 3 and 4 to pass Friesen, but couldn’t clear Haers before the checkered flag. Ahead of them, Johnson spent the last ten laps of the race trailing Decker by mere car lengths, often nose-to-tail with the No. 91. However, Decker never gave in, and came out on top at the finish line.

“It’s good to be back here at Ransomville,” said Decker, who finished third the last time the Super DIRTcar Series visited Ransomville Speedway in July of 2009. “I’d like to thank the Friesen family and all the Ransomville fans for bringing the Big Blocks back here to Ransomville. We certainly appreciate it. It’s always fun to be here.”

Decker was pleased to have stayed ahead of Johnson, a strong contender coming off two consecutive Super DIRTcar Series wins.

“He’s the hottest driver around right now. I mean, that guy is having trouble losing a race,” Decker said of his rival. “But I knew if I kept running the way I was running — I think the 91 car was pretty good — I didn’t think we were in very much trouble.”

Haers battled his way to stay in third, defending against charges from Friesen and Sheppard.

“We fought hard out there,” said Haers, who has troubles Monday, coming in 18th at Merrittville Speedway. “I have to thank the guys at Bicknell Racing Products. We were horrible last night at Merrittville, and we brought our car there today and changed some stuff on it. We went right to work.”

The Super DIRTcar Big Block Modified Series rounds out the week at Weedsport Speedway in Weedsport, N.Y., with the ‘Hall of Fame 100’ Thursday, Aug. 7. The DIRTcar Hall of Fame induction ceremony sets the stage for Thursday’s race, honoring three of the region’s celebrated drivers Wednesday, Aug. 6, at the Hall of Fame & Classic Car Museum at 1 Speedway Drive, Weedsport. For more information about the Super DIRTcar Series, visit www.superdirtcarseries.com.