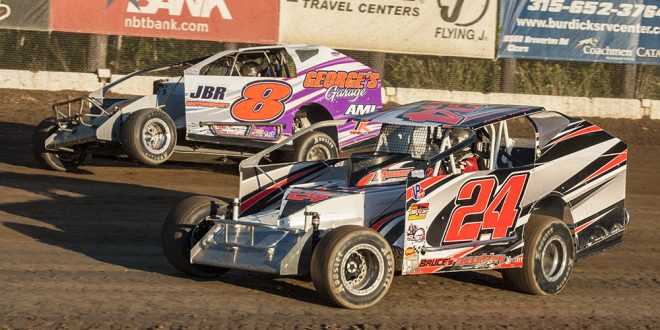 CONCORD, NC – August 21, 2018 – On Friday, September 14, Brewerton Speedway, otherwise known as the D-Shaped Dirt Demon, hosts the fourth annual Duel at the Demon. The best Big-Block Modified drivers of the Northeast square off on the one-third mile dirt oval for 100 laps. With excitement building for the 47th annual NAPA Auto Parts Super DIRT Week, teams are keen to grab every position and every championship point to gain momentum on the road to Oswego.

The battle at the top of the championship point standings is extremely close. Despite his setback at Ransomville Speedway, Erick Rudolph is only 94 points behind Matt Sheppard. Rudolph will need to make up points in heat races and in features to catch the tremendously consistent Sheppard.

Third and fourth place in the Series standings call the D-Shaped Dirt Demon home on Friday nights. Vital to the points battle, Jimmy Phelps and Max McLaughlin hope to utilize their homefield advantage to make gains on championship points leader Matt Sheppard. The HBR Motorsports teammates have a combined four wins on the Central New York oval in 2018. Phelps leads all drivers in Brewerton Speedway points, and McLaughlin rides in third.

Danny Johnson has been the comeback story of the year. Disaster struck the orange No. 27J at Orange County Fair Speedway when the car struck the inside wall and launched into the air. Upon landing the car was clipped again, destroying the Big-Block Modified. Luckily Johnson emerged unscathed, however the car was a write off. The Doctor found himself in need of a ride. First, Tyler Siri stepped up with a car to keep Johnson in the points chase. Then Peter Britten’s car owner Ray Graham entered the picture with a new Troyer-built race car. Since then, Johnson has pushed himself up to fifth in the standings, including a win on a last lap pass at Airborne Park Speedway.

While leading in weekly Brewerton Speedway wins, former Super DIRTcar Series regular Larry Wight sits second in their points. He, too, hopes to take advantage of his extensive set-up notebook to steal a win from the Series regulars. Meanwhile strong competitors Gary Tomkins and Chris Hile round out Brewerton Speedway points in fourth and fifth. Both drivers are worth watching for an upset trip to Victory Lane.

The 2017 Duel at the Demon saw Matt Sheppard surge late to take the checkered flag. He drove around the local favorite No. 99L of Larry Wight with less than 10 laps remaining for the win. Earlier this year Sheppard dominated Brewerton Speedway’s Showdown at Sundown 100 for his second Series win of the season. No driver has previously dominated Brewerton Speedway in Series competition, but Sheppard has taken the last two feature wins there, which gives him three Series victories on the one-third mile track. Jimmy Phelps, Billy Decker, and Bob McCreadie all have two wins each out of the sixteen Series races completed.

Admission for the Duel at the Demon is $25. Also in competition are the Central Region DIRTcar Sportsman, who have a 50-lap Feature on the docket.

The next Series race takes place at Mohawk International Speedway the next day, Saturday, September 15.