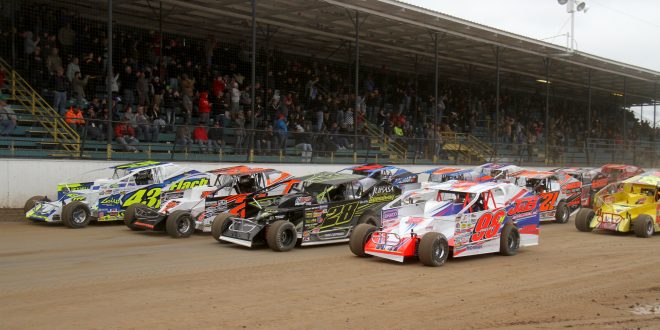 Nearly 70 of the best Big Block Modified drivers in the world have submitted pre-entries for the Billy Whittaker Cars 200, with more expected as the event opens.

In its history, thousands of drivers have attempted to qualify for the October classic, fewer still have finished the ultimate test of endurance in dirt racing, and only legends have celebrated NAPA Super DIRT Week glory in Victory Lane.

From The Moody Mile to The Clay Palace, the intensity remains the same. The high-stakes remain the same. And the racing? It has never been better.

Last year, Larry Wight electrified the crowd by holding off a charging Stewart Friesen to win his first NAPA Super DIRT Week Championship. Wight is locked in and focused to go for number two.

Sheppard comes into NAPA Super DIRT Week with a 90-point lead in the Super DIRTcar Series over Mat Williamson, who has won two of the past three Series races.  Will Sheppard join Alan Johnson on the three-wins list when the dust settles on Sunday, Oct. 13 at the conclusion of 200 hard-fought laps or will Williamson add another notch on his belt in 2019?

Danny Johnson, back in his familiar orange No. 27J, also wants to join “AJ Slideways” in the record books. He enters NAPA Super DIRT Week ninth in points in a tumultuous year for the Rochester, NY driver.

The Sensational One Jimmy Horton announced his intentions to add to his NAPA Super DIRT Week Championships, as well. Like Danny Johnson, Horton has been battling the likes of Alan Johnson for decades. Alan Johnson will be back behind the wheel of the familiar No. 14J in an attempt to break into the four-win category. If Alan Johnson wins, he’ll join Billy Decker and Gary Balough on an elite tier on the win list.

Decker’s return to Gypsum Racing has put him fourth in points this season. He’s been fast and consistent, but he has yet to break through with a points-paying win. His last trip to Victory Lane in Series action came at the DIRTcar Nationals back in February. A fifth Billy Whittaker Cars 200 win would bump Decker into a tie with Stewart Friesen.

Friesen, a current NASCAR Gander Mountain Truck Series driver, returns to Oswego with the No. 44 Big Block Modified looking for his sixth NAPA Super DIRT Week Championship. Friesen won four at The Moody Mile and took the very first Billy Whittaker Cars 200 at Oswego Speedway. There is only one more step to reach the peak of NAPA Super DIRT Week history.

One more win for Friesen ties him with none other than Brett “The Jet” Hearn.

Hearn only ran the Super DIRTcar Series part-time in 2019, splitting time with Orange County Fair Speedway, where he won the track championship. Hearn will definitely be aiming to take that Middletown, NY speed to Oswego and make it a lucky seven NAPA Super DIRT Week championships.

But Dunn, Tremont and Fuller can’t let sleeping dogs lie. They are all going for number two in 2019, and Tremont carries a guaranteed start from winning Mr. DIRT Track USA at Lebanon Valley Speedway.

The list of elite drivers who haven’t taken home a $50,000 Billy Whittaker Cars 200 paycheck is proof of how difficult it is to win this race.

Erick Rudolph and Mat Williamson have battled tooth and nail throughout the year, chasing Sheppard in the standings. They also race head-to-head at DIRTcar 358 Modified Series races as well as weekly at Ransomville Speedway. These two are clean, fast and professional rivals. But there is only one winner and both of these drivers will do what it takes to capture their first Billy Whittaker Cars 200.

Veteran Jimmy Phelps stretched the fuel in his No. 98H machine to the limit last year, but it didn’t pay off. Will the HBR team try an alternate strategy again this year? He’ll be joined by teammate Max McLaughlin, who competed in the NASCAR K&N Series in 2019.

Peter Britten won the Salute to the Troops 150 last year in the DIRTcar 358 Modifieds so he knows what it takes to win at Oswego Speedway. The No. 21A has had a rocky year but is always fast off the trailer. Britten is a great mid-round fantasy pick.

One of the big surprises of 2019 is the full-time status of Ryan Godown from Ringoes, NJ. Godown has a guaranteed start from a runner-up finish to Sheppard at Orange County Fair Speedway. The big stage at Oswego is calling and Godown is looking to put on a show.

Another rookie, Demetrios Drellos, won the biggest race of his career at Albany-Saratoga Speedway taking home $10,000 and a guaranteed start in the Billy Whittaker Cars 200. He’s proven his mettle against the best and the No. 111 is a serious threat to win.

Fellow Series drivers Jack Lehner, Marcus Dinkins, Paul St-Sauveur and Rusty Smith will be forces, as well. They are all running in the top 17 in points, and every position counts as the year closes out.

It all goes down on Sunday, Oct. 13. At 1:30 p.m. the Super DIRTcar Series Billy Whittaker Cars 200 Pre-Race Ceremonies begin, with the green flag waving at 2 p.m.