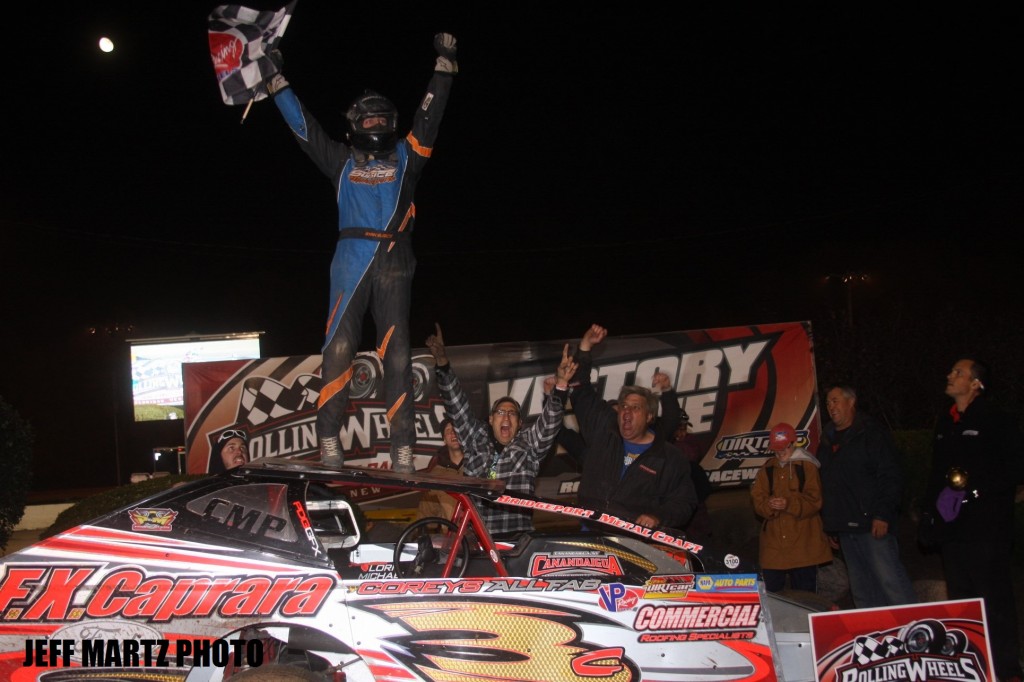 Fortunately, the day ended on a high note, as Susice charged from the rear of a 24-car field to score a dramatic win at Rolling Wheels Raceway Park. Saturday’s Big Block Modified Win and You’re In victory put Susice back on track, giving him a starting spot for the biggest race of his career.

“This whole weekend has been a whirlwind for us,” commented Susice, who was ecstatic to have joined the Syracuse 200 field. “I don’t even know how to begin to express it. I never thought in a million years I’d be here. We couldn’t do it financially for our small block cars, and I’ve only run a Big Block a few times.”

Susice, a “Moody Mile” rookie piloted the Jeremy Corcoran owned No. 3c to victory lane in the 35-lap Win and You’re In event. Corcoran time trialed in the No. 3c Thursday before calling on Susice to get behind the wheel. For Susice, the offer was unexpected but not unwelcome. Susice took the car to third in Friday’s DIRTcar Futures races, but lost momentum in the night’s heat race and finished 19th. When he fell short in the Last Chance Qualifier, Susice thought it was all over.

“I wasn’t supposed to drive this car at the Mile, it just fell into my hands,” Susice said. “We weren’t supposed to come here today, it was a last minute deal. Jeremy told me at the last minute, ‘Why don’t you take the car so you can run over here?’”

So they did. The team, a combination of Susice’s Ransomville Speedway crew and Corcoran’s crew, packed up the hauler at the Fairgrounds and drove it straight to Rolling Wheels. They rolled out the No. 3c, set up for the unique conditions at the Mile, and got to work preparing for the five-eighths mile oval at the Wheels.

“We just started changing stuff – after warm-ups, after the heat,” Susice said.

Susice started seventh on the starting grid with Chris Hile and Jeff Brownell, Jr., on the front row. A first lap caution led to an early restart, and Hile and Brownell battled for the lead. The two got tangled up, causing Hile’s No. 5H spin – a complete 360 – but Hile brought it back under control quickly to avoid another yellow. After his early-race stunt, Hile chased down Brownell in the lead, and was able to pass him off a lap-6 restart.

In lap 7, a collision in turn 2 caused runner-up Brownell to barrel roll and brought the yellow flag. Susice pit under yellow with a flat and went tail at the restart. He worked his way forward, picking off cars until his was second in lap 20. Susice cruised to the topside to pass Hile for the lead in lap 21, racing wheel-to-wheel and entire lap before finally taking the position with just three laps to go.

As for tomorrow’s big race at the Mile, Susice said he is ready to be a little daring, especially since he’s going into a race most teams plan for all year without a strategy.

“Unfortunately, we haven’t had a lot of time to prepare with fuel mileage or a pit strategy yet, so I guess our deal is just going to be wing it,” Susice said. “Probably just have a random guess at what we’re going to do, just try something crazy and see what happens.”

“Winging it” might not work for everyone, but it’s worked for Susice’s team so far.