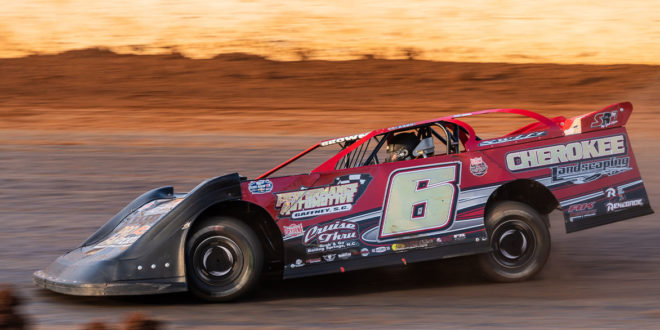 Dillon Brown waited patiently to make his move Saturday at The Dirt Track at Charlotte. He knew the outside lane was the place to be but waited to move up to save his tires.

The decision paid off for the Gaffney, SC driver as he led wire-to-wire to take home the Fox Factory Pro Late Models Feature at the Drydene World Short Track Championship.

Once Brown hit the cushion, he thundered away from the field—beating Ben Watkins to the line for the Victory.

“I was going to take of my tires as long as I could,” Brown said. “I knew (the top) was there, and I just kept seeing it get cleaner and cleaner, so I said I’m just going to go up there and fill it. I went up there one time, and I said this is where I need to be.”

Despite Brown’s dominance in the Feature, he had to fight through slower traffic toward the end of the race. In the final two laps, the Gaffney, SC driver approached an epic three-wide battle in front of him. He held on long enough without allowing Watkins to close in on him.

“I was looking left and looking right, just making sure I wasn’t going to slip with the lead and making sure they weren’t going to wreck in front of me,” Brown said. “I was just trying to fill every hole I could to keep every lane I could clog up. When I saw the white flag, I said thank god.”

Watkins crossed the line second, riding the cushion the entire race. The Lancaster, SC campaigner stated he wished he found the top a few laps sooner.

“We came home second and started fourth; the redraw kind of killed us,” Watkins said. “Once we got going, we had a really good car, but that’s crate racing, you get behind a little bit, and it’s hard to make it up.”

Tyler Nicely crossed the line third but was disqualified after he was light at the scales. Colton Trouille inherited the final podium position and was the first car to test the waters on the high side.

“Right at the beginning, I was running the bottom, and I fell back a couple of spots, so I went to the top, and I started gaining them back,” Trouille said. “The car was good; we went to Barry Wright earlier this week and got it fixed up because we’ve had problems with it, and I can’t thank everybody enough.

The Fox Factory 604 Late Models capped off Saturday with a 15-lap All-Star Feature, where Tyler Nicely earned redemption from earlier in the evening. 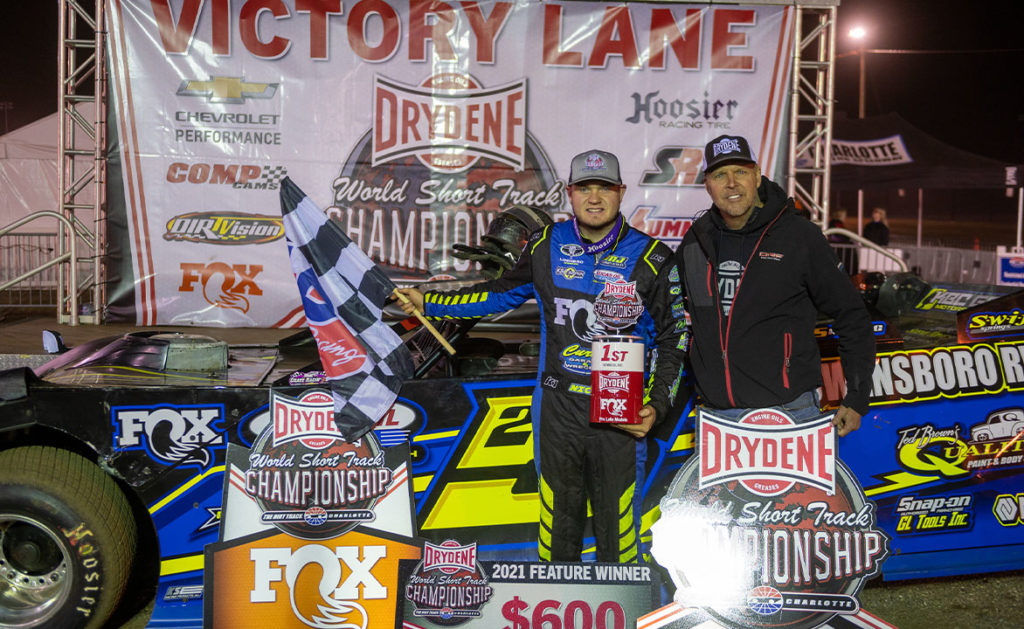 The Owensboro, KY driver took the lead from the drop of the green and never looked back en route to Victory Lane. Nicely stated he took a step forward running a Late Model after previous experience in a UMP Modified.

“We were pretty good in the first (Feature), just things didn’t work out our way,” Nicely said. “It’s a big learning experience for me moving from the modifieds to the crates, so the more seat time I get, I’ll get more comfortable.”