Krup, Hoffman and Nicely tangle in Turns 1-2 after battling in lapped traffic

MORGANTOWN, KY – After one of the wildest turn of events seen all year on the DIRTcar Summit Racing Equipment Modified Nationals circuit, Utica, KY’s own Josh Harris pulled off his fourth career victory with the tour in Saturday night’s Hope for Harlie finale at Cedar Ridge Speedway.

Harris had marched his way up from ninth to fourth and was riding with a sizable gap to Tyler Nicely as they rounded Turn 4 to complete Lap 26. By the time he reached the exit of Turn 2 on Lap 27, Harris was the race leader.

Friday night’s Hope for Harlie preliminary Feature winner Will Krup had led since the drop of the green and was in the thick of a big battle for the lead with 2020 tour champion Nick Hoffman, deep in lapped traffic. The two frontrunners approached a pack of several slower cars, spread out across all three grooves, with Hoffman on the top and Krup on the bottom.

Coming out of Turn 4 on Lap 26, Hoffman made a dive to the inside to try and get around the pack but hadn’t quite cleared Krup’s nose and made contact with it going down the frontstretch. Hoffman was able to gather it back in before entering Turn 1, but ended up sliding up the track right in front of Krup, who had switched to the high side.

The contact that ensued sent both drivers around in the middle of Turns 1-2, leaving Nicely barreling through with no place to go, as he and another lapped car piled in and made substantial contact.

“Nick went to the bottom there and I crossed lanes to go to the top, he slid from the top and I just had nowhere to go,” Krup said of the incident. “I tried to get on the brakes. Looking at the video, Tyler didn’t have anywhere to go, so he got into me, and it was just all a bang-bang deal, all three of us were out.”

And just like that, all three leaders were taken out of the race. Nicely left the racing surface on the hook, Krup drove back to the pit area and Hoffman soon followed suit.

“I’d seen Tyler [Nicely] right in front of me,” Harris said from his point-of-view. “I wasn’t really gaining on him and he wasn’t getting away from me. I was hoping we had a caution so we could race it out and see where we were with him, but I wasn’t expecting the caution to be for all three of them.

“We got through that wreck; there were cars going everywhere, it was kinda like a Daytona crash.”

With Harris now in the lead, it was his race to lose. The field went back to green as Danny Schwartz, Jimmy Payne and Gabriel Kirtley now moved into the picture. Try as they may, though, Harris’ Mark Bush Racing Chassis #22H was not to be beaten. He led the field the rest of the way home in the 40-lap contest to pick up his first Summit Modified victory of the season and the $3,000 top prize.

“I have lost plenty the way that I won it tonight. Obviously [this is] not the way you want to win it, but you take them any way you can get them,” Harris said.

Meanwhile, the Elite Chassis trio sat parked in the pit area, loading up after a sour conclusion to the weekend that ended with finishes of 13th (Hoffman), 14th (Krup) and 15th (Nicely). Through it all, Krup did come away with the one victory on Friday night, although he felt he could have completed the sweep on Saturday.

“We were just kinda cruising there, trying not to burn up the tires,” Krup said. “Just trying to take our time, pick off the lapped traffic when we could. It got super racey there, and I think our car pretty good and definitely had a shot to win this deal.”

Despite his gain from their expense on Saturday, Harris did tip his cap to the dominance of the Elite Chassis gang throughout the year. Hoffman, Krup, Nicely and Plainfield, IL-pilot Mike McKinney have combined for a significant number of Feature wins this year, and Harris will be gunning for them next season.

“Our car was really good. We’ve been really working hard on chasing those guys. It’s no secret that those three and McKinney are the four fastest cars in the country right now. I believe we’re fifth right behind them,” Harris said.

The 2020 DIRTcar Summit Racing Equipment Modified Nationals field jumps back into action one final time this year for the Modified portion of the Hooiser Dirt Shootout makeup race at Kokomo Speedway. Catch all the action live on DIRTVision. 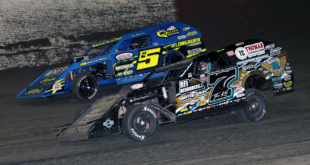