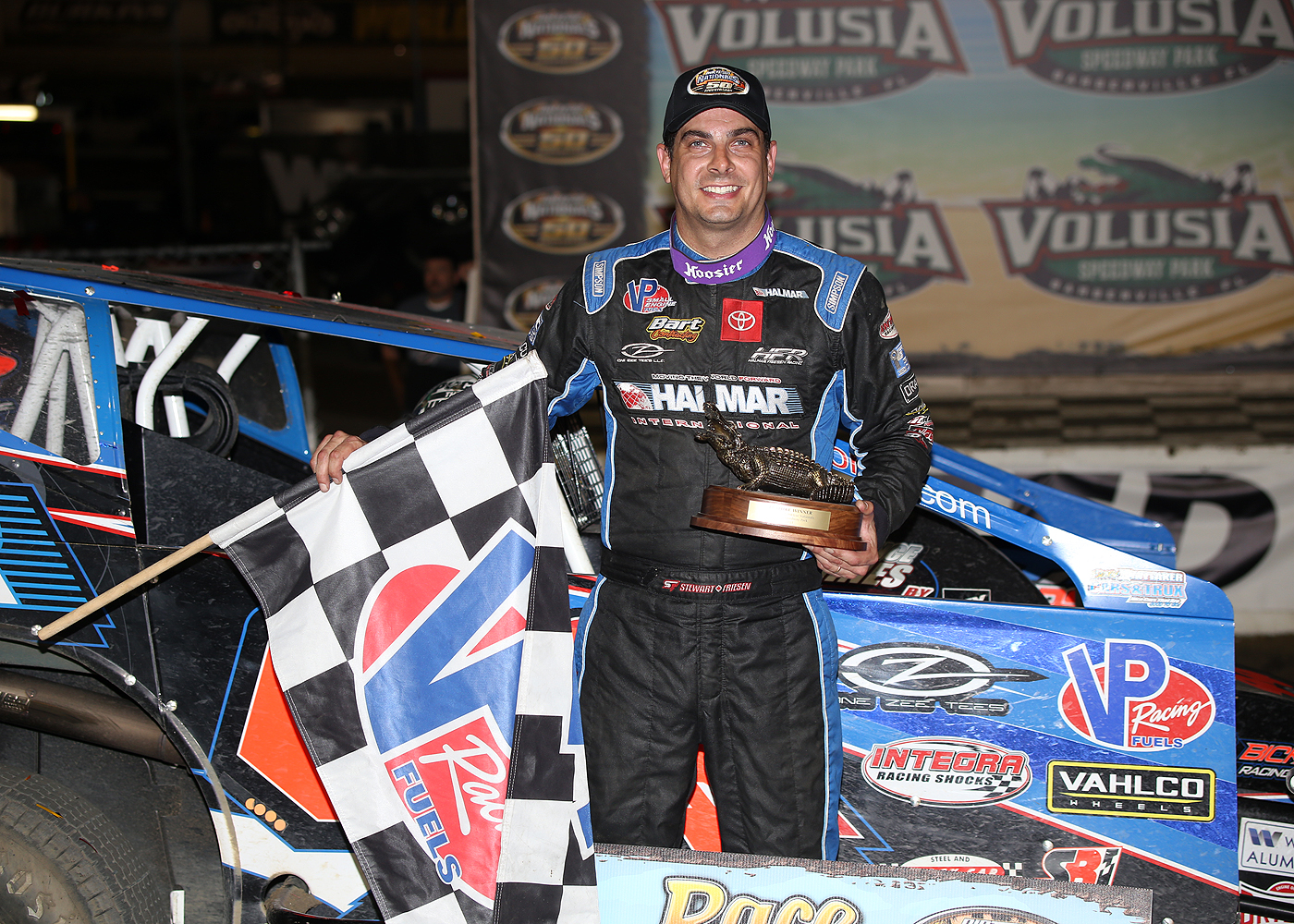 BACKING IT IN: Friesen Holds off Britten in Dicey Duel, Bags First Big Block Gator of 2021

BARBERVILLE, FL — “Daddy, do we get an alligator?”

Britten, from Brisbane, Australia, in a brand new Ryder Racing-sponsored Bicknell chassis Big Block Modified, threw everything he had at Friesen in a mad duel through lapped traffic. Friesen held off the #21A machine for the checkered flag with an aggressive line around the top side of The World’s Fastest Half-Mile, and delivered that Gator Trophy to his young son in Victory Lane.

“It was a very technical race track,” said Friesen, now of Sprakers, NY. “That’s the closest I’ve ever driven a Big Block Modified to a wingless sprint car, I just backed it in. There’s not much grip on the right front.”

Britten and Friesen battled hard throughout the first half of the race. After a long green-flag run during the midpoint of the 30-lapper, Friesen caught the rear of the field. What ensued was a memorable duel where both drivers crisscrossed from top to bottom trying to find the fastest way around the lapped cars and each other.

“I was trying to get through the lapped cars as quick as I could, but it was tough because it was so slick,” Friesen noted. “I kept losing the right front. I felt Peter [Britten] give me a shot out of four one time but the Halmar team prevailed.”

With 19 laps to go, Britten got under Friesen on restart and drove by the #44 in Turn 1, but a caution flag flew for a hard crash involving multiple cars including Jim Britt, Tyler Jashembowski, and Dave Rauscher. Unfortunately for Britten, the pass was nullified as the lap was incomplete.

“If I hadn’t gotten that caution and gone out ahead, Friesen was fast but we were right there with him,” Britten said. “It would have been interesting to see if we could have held him off. But I’m just tickled to be there.”

Expectations are high for Britten as he moved to a Bicknell-built chassis for the first time in his career. With an all-new all-black paint scheme, it’s hard to avoid the Batmobile comparisons given his nickname “Batman.” But it hasn’t all been good luck for Britten in Florida this year.

“We wrecked a car and it’s been a thrash since then,” Britten said. “A lot of people helped me to get to where I am even to just make it back to the race track. Me and Dylan [Zacharias] thrashed on this thing day and night basically to get it ready. It’s a good feeling to be up here for sure.”

Friesen, who also competes in the NASCAR Truck Series, is now an eight-time DIRTcar Nationals Feature winner after the $4,000 victory. But the native of Niagara-on-the-Lake, Ontario, was racing with a heavy heart following news coming out of his native province.

“I’m thinking about my friends in St. Catharines, Ontario, Doug and Todd Gordon at Concept 1 Fabrication,” Friesen said. “They had a big fire. They lost a lot, if not everything. They are diehard racers who I grew up with. When I first started racing I could go and see “Flash” and he’d fix me up. We’re going to work hard to get him fixed up again.”

Rounding out the podium was the Gypsum Racing #91 of Billy Decker. The “Franklin Flyer” passed Max McLaughlin for third on the last lap. Decker and McLaughlin traded sliders in the closing stages of the Feature, but the veteran came out on top.

“The Gypsum Wholesaler car was really good,” Decker said. “It was a tough track tonight. We were blazing around the top. I got to third on a restart and hit lapped traffic and Max [McLaughlin] got by us. Then we hit more lapped traffic we got back by him on the last lap. I’m happy to come out of here with a top-three tonight and we’ll see what we can scrounge up tomorrow.”

All 32 Big Block Modifieds on the property started the Feature.

Derrick Mcgrew Jr. found himself on his roof in Turn 1 after a short wall ride. The young driver got out of the stricken #26 under his own power looking no worse than disappointed.

Friesen picked up the first Billy Whittaker Cars Fast-Time Award with a 17.463 lap around The World’s Fastest Half-Mile.

The action continues on Wednesday night with another 30-lap, $4,000-to-win Super DIRTcar Series Feature plus the World of Outlaws Morton Buildings Late Models.

If you can’t make it to the race track be sure to watch live with DIRTVision. 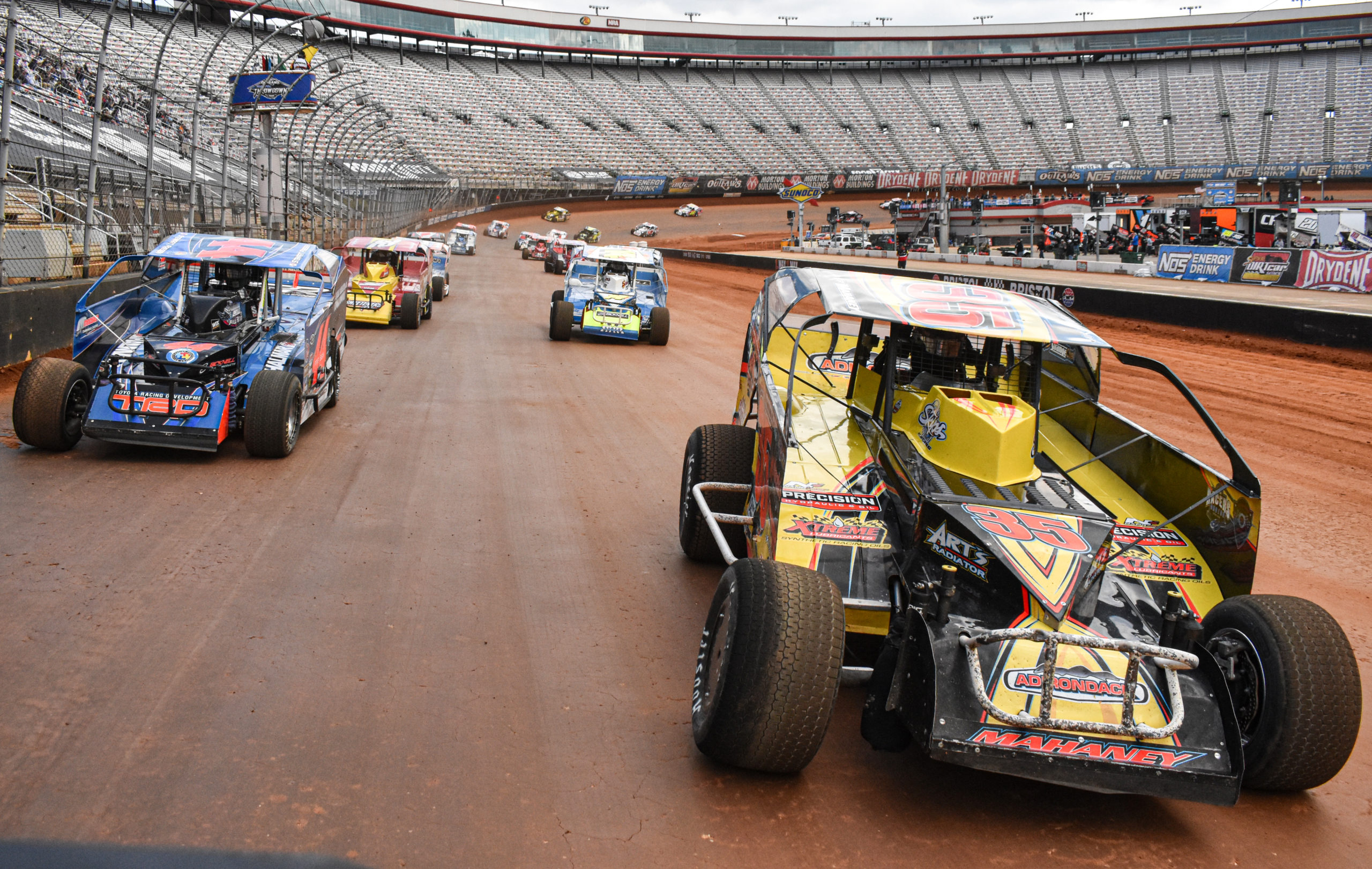 WHAT TO WATCH FOR: Friesen’s Win Streak at Three, Mahaney and Series Stars Seek Revenge at King of the Big Blocks 100 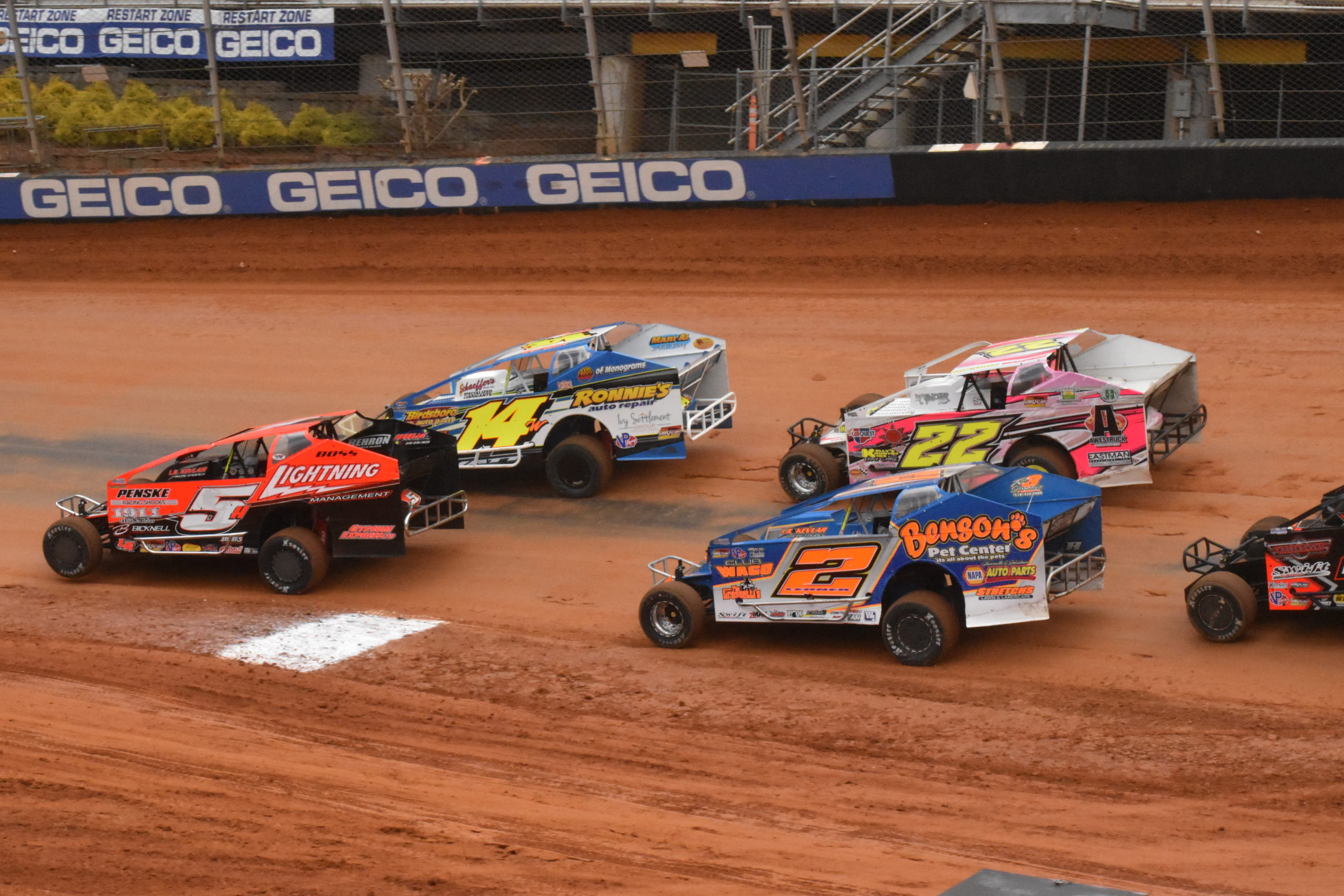