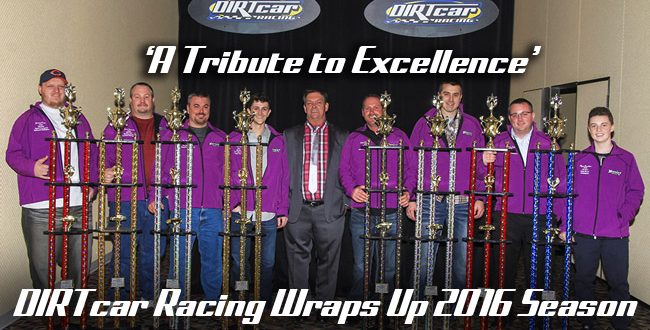 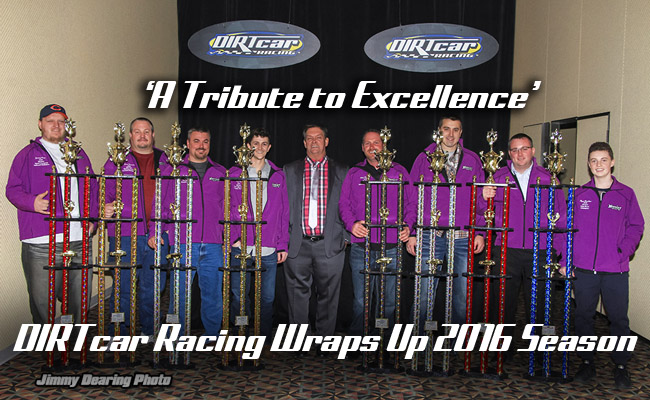 Nearly $330,000 in points-fund cash distributed to drivers for 2016 season successes

While the weather outside was brutal,  the Springfield Crowne Plaza Hotel ballroom inside was warm as guests reminisced on a great 2016 season. Nearly 1,000 competitors, family and friends attended Saturday evening’s event.  There, DIRTcar Racing distributed close to $330,000 to competitors in recognition of their successes during the 2016 season.

Harrison, a native of Highland Creek, Ill., comes off another stellar season, aside from finishing first in the national points standings, Harrison went on to finish fifth in the Illinois region, fourth in the Southern Illinois/Missouri region, and second in the Summit Modified Nationals. Harrison recorded 21 wins during the 2016 season. This is Harrison’s fifth Modified Nationals Championship.

A.J. May of Creve Coeur, IL, took top honors in the DIRTcar Pro Late Model National Championship, worth $10,000 dollars. May visited Victory Lane at DIRTcar-sanctioned events 15 times during the season.

Federated Auto Parts  Raceway at I-55 was named the 2016 DIRTcar Track of the Year. I-55 Raceway in Pevely, Mo. is a high-banked 1/3-mile high-banked oval that features Saturday night racing. Additionally, the Raceway plays hosts to the Ironman for the World of Outlaws Craftsman® Sprint Car Series. Owners Ray and Sue Marler were on-hand to accept the award.

Jason Plummer was honored as the 2016 DIRTcar Promoter of the Year. Plummer is the promoter for Peoria Speedway.

Jeremy Reed, of Decatur, Ill., was the DIRTcar Sports Compact National Champion. Reed went on to finish fifth in the West region and sixth in the North region. Reed totaled 22 victories during the 2016 season.

In the DIRTcar Factory Stock national points standings, Jesse Simmons of Danville, Ill. came out on top. Simmons claimed had 18 wins during the 2016 season. He received $1,000 for his championship.

With 13 wins on the year, Steve Peeden from Paragon, In, was the DIRTcar Sportsman national champion. In addition to his National Champion, Peeden also won the East region.

Tim Hancock was honored for his DIRTcar Pro Modified Series national title. Hancock had 19 wins throughout the season and received $1,000 from the points fund.

Andrew Funk from Dwight, Ill., had 26 wins during the 2016 season. Funk was the Stock Car National Champion. Funk also finished second in the North and fifth in the South region.

The 2016 Kid Modz championship went to Ryan Hamilton of Fairview Heights, Ill. Hamilton had six wins on the season.

State and regional champions recognized during the banquet included:

Other special awards were handed out during the banquet:

Bo Brockway, of Glasford Ill., finished 41st in the DIRTcar Late Model national points en route to the 2016 Rookie of the Year title.

The 2017 DIRTcar Late Models kick off their season on Feb. 12 at North Florida Speedway. The Late Models will join DIRTcar Nationals for three nights of action packed racing on Feb. 20-22.

For more information on DIRTcar Racing and to see the complete final points standings for all DIRTcar-sanctioned divisions, visit www.dirtcarump.com.