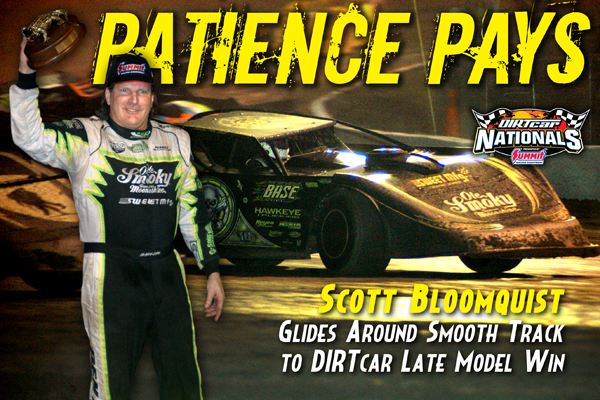 The track crew at Volusia worked its magic once again and slowed down the half-mile dirt oval heading into Wednesday’s action, and that played into Bloomquist’s experience. He worked his way past another dirt late model legend, Billy Moyer, and into the lead midway through the 40-lap main event. Bloomquist never missed his mark in the caution-free race, deftly handling lapped traffic, and drove to victory ahead of Dale McDowell and Eric Wells.

“The racetrack was awesome tonight,” said Bloomquist, 50, of Mooresburg, Tenn., who also has finishes of sixth (Monday) and fifth (Tuesday) during the DIRTcar Nationals. “It’s a little different when you just don’t sit out there and have everybody hold it on the floor all night. You got to have a little bit of foot, a little bit of patience.”

Haers just missed a win during last season’s DIRTcar Nationals, but he wouldn’t be denied in Wednesday night’s 30-lap Big-Block Modified opener. Starting on the pole, Haers jumped out quickly and rolled through the corners as the track began to turn slick. Australia’s Peter Britten closed fast and kept the pressure mounting, even jumping to the lead for a lap before Haers quickly reclaimed the top spot.

Once he was back in front Haers simply pulled away, leaving no chance he could be caught by either eventual runner-up Anthony Perrego or third-place finishing Billy Pauch.

“We’ve been good since we unloaded,” said Haers, 34, of Phelps, N.Y. “Tonight we’re really good. I told my guys, ‘We’re going to get a Gator (trophy) this year.’ We came so close last year. When I got passed there for the lead, I didn’t know how good the top was up there. I just kept digging and digging and fighting, and I finally got a run on him and cleared him.”

The World of Outlaws Late Models invade Volusia on Thursday to join the Super DIRTcar Series Big-Block Modifieds for the final three nights of action during the DIRTcar Nationals presented by Summit Racing Equipment.