Sedalia, MO (June 25, 2010) – The MARS DIRTcar Series was well represented as Springfield, Missouri’s Terry Phillips and Eric Turner battled back and forth during the 30 lap $3,000 feature event at the Missouri State Fair Speedway in Sedalia, MO. In a MARS vs. MLRA shootout, Phillips picked up his third win of the season and 70th overall on the eleven year old series and Turner would settle for second.

Denny Eckrich of Tiffin, IA crossed the finish line in third and Republic, MO driver Brad Looney was fourth. Al Purkey of Coffeyville, KS rounded out the night in fifth.

B features were won by: Al Purkey and Bryant Goldsmith 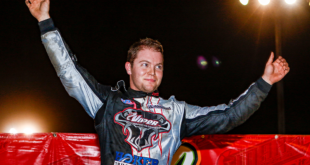