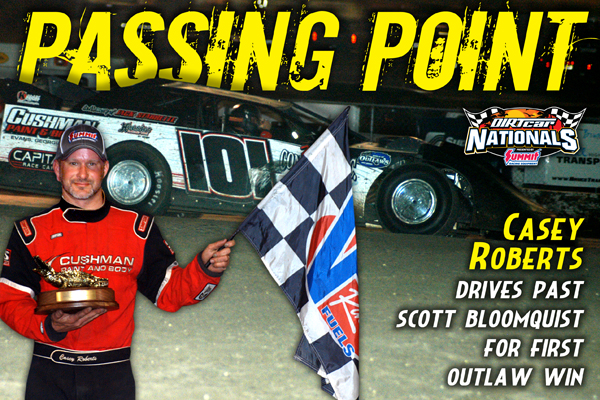 Roberts, 36, pulled off one of the biggest upsets in the history of the DIRTcar Nationals presented by Summit Racing Equipment, passing dirt-track legend Scott Bloomquist coming to the white flag and hanging on to win. Refusing to concede after losing the lead to Bloomquist on lap 31 of the 50-lap feature, Roberts patiently stuck to the bottom of the half-mile oval and slipped ahead of Wednesday night’s DIRTcar Late Model feature victor to gain command as lap 49 was scored. Roberts then staved off a last-ditch bid by Bloomquist to score his first-ever World of Outlaws Late Model Series triumph by a mere. 0.185 of a second.

“I’m pretty much a no-name or whatever,” Roberts, of Toccoa, Ga., modestly said while standing on the homestretch stage following the race. “I guess everybody thinks it’s good to see guys like me win. I’ll tell you, I’m just blessed to be here. It feels like it’s not even really happening.”

Bloomquist held on to finish second and Dale McDowell was third

On the flip side, Friesen was strong all night and charged out quickly in the Super DIRTcar Series 30-lap main event. He picked his way through lapped traffic in the caution-free race to win for the fifth time at Volusia Speedway Park.

“We were very happy to win tonight,” said Friesen, 30, of Sprakers, N.Y. “We had a great race car, we had a good time trial, we were able to start up front. Obviously, getting the redraw number one was super beneficial and we were able to capitalize on it. … Hopefully the track stays like this because we’ve got everything pretty dialed in right now. Starting position was key tonight, and we’ll try to do our best going forward.”

The World of Outlaws Late Models and Super DIRTcar Big-Blocks return to Volusia on Friday night. Gates open at 5 p.m., hot laps begin at 6 p.m. and racing is at 7:30 p.m.