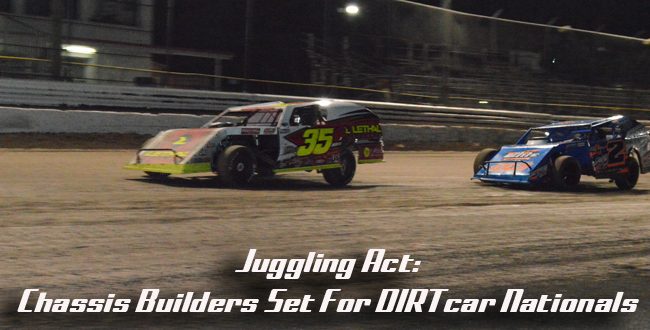 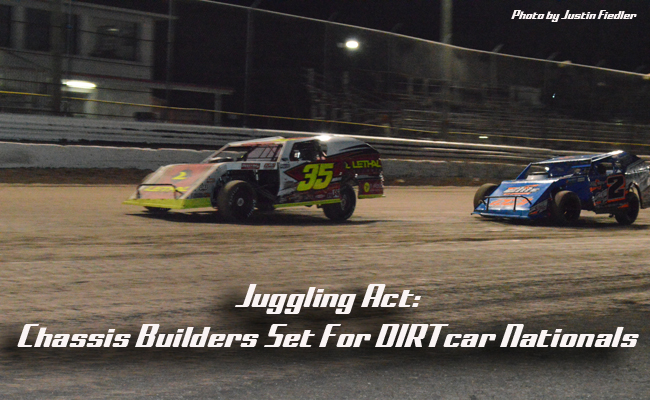 If eight consecutive nights of racing sounds challenging, it is. Four DIRTcar UMP Modified drivers are adding another layer to that task when they compete at the 46th DIRTcar Nationals at Volusia Speedway Park in Barberville, FL from February 14-25, 2017.

David Stremme, Nick Hoffman, David Reutimann and Brian Ruhlman are gearing up to tackle eight straight nights at Volusia, but all four drivers are also chassis builders. They’ll not only be focused on their own equipment, but also on as many as a dozen others competing in cars they’ve fabricated.

Stremme, who enters his third season operating Lethal Chassis in Mooresville, NC, anticipates he’ll have up to 13 customers racing at Volusia. Organizing for a trip of this length, with customer service and maintenance in mind, is a challenging task, but one Stremme’s ready to tackle.

“I’ve always been a planning and scheduling type person,” Stremme said. “I would say we’re prepared as much as we think we need to be, but I don’t think you’re ever prepared [enough]. I’ll bring a whole other trailer with stuff for our customers.”

Nick Hoffman, the two-time defending DIRTcar Nationals UMP Modified champion, is also based in Mooresville as the builder of Elite Chassis. Now in its fifth year, Hoffman and his team are currently building their 65th car and expect as many as seven clients to compete at Volusia. Countless hours of preparation have gone into the offseason to make sure he can service his teams as needed in the Sunshine State.

“It’s the biggest thing for me. If we have seven cars down there, I have to have stuff for myself but I’ll also bring 10-15 bumpers and I’ll have my trailer packed front to back and all the way to the top with tires and body panels,” Hoffman explained. “It’s a lot of preparation to get stuff built and stocked up for this.”

David Reutimann, the owner of Beak Built chassis in North Carolina, knows that space in the trailer is always at a premium. Regardless, he’ll find a way to meet his customers’ needs.

“You’ll have some guys say ‘while you’re coming down, how about you bring us four or five bumpers’. Sometimes it’s a bit of a juggling act to get everything in there,” Reutimann said.

Clarklake, Mich. native Brian Ruhlman, the owner and builder of Ruhlman Racecars, is also knee-deep in his planning. Ruhlman also expects to have a handful of competitors driving equipment with his stamp at the DIRTcar Nationals. Last year, he found Victory Lane at Volusia for the first time and knows another successful trip south is the best publicity available.

“For us, it’s more of a marketing deal in order to keep yourself relevant. If you go down there and run well or win races, that kind of makes you relevant within the market for the year,” Ruhlman explained.

In theory, it seems like a stressful operation, but only until the cars are loaded and out of the shop. Then, its time to race, relax and enjoy a reunion of sorts amongst customers, who often become good friends.

“Our customer base is really spread out, which is a good thing for us. I’ve got guys all over the place and everybody kind of congregates down there because that’s the only thing going on. It’s nice to see them face-to-face,” Ruhlman said.

There’s an added benefit to the rare opportunity to learn and converse with customers in person.

“The approach I take, with all of our customers, they get exactly what we’re running, unless we’re working on something new,” Ruhlman said. “Being an engineer, it’s a lot easier to explain the why. Here’s what it does, here’s why it does it and here’s how to manage it.”

Stremme echoed a similar sentiment, but highlighted the DIRTcar Nationals are more than a business trip.

“I’ll be honest, when I get to the track, that’s my de-stress time. You work so hard in the shop to do all this stuff, but when you go there and you can see a customer run well, that result is what’s refreshing from the work in the shop,” Stremme said.

“The biggest thing is I pretty much get along with all my customers really well. We’re all a bunch of buddies,” Hoffman said. “We try to treat it like a vacation as much as we can. That’s what makes it different from any other race the rest of the year.”

It doesn’t mean competitive spirit is thrown out the window. Each of these drivers knows there’s plenty of prestige associated with a Gator trophy.

“My main thing is I want to win, but I want my customers to win too. I want them to run as well as I do and we try to give it everything we’ve got,” Stremme said.

The DIRTcar Nationals are also a measuring stick for a number of drivers who hope to reach Victory Lane throughout the season.

“Pretty much anybody that’s anybody in the Modified world is there racing. You can win at a local racetrack on any given level and feel like you’re in pretty good shape, but then you’ll go to a place like Volusia and realize how far you’re off,” Reutimann said. “Sometimes it’s a reality check.”

The historic DIRTcar Nationals is the most accessible motorsports event during the Florida in February jaunt. Every ticket is a pit pass, so fans can get up close and personal to all the action. Fans will be able to meet their favorite drivers from each of the competing series below.