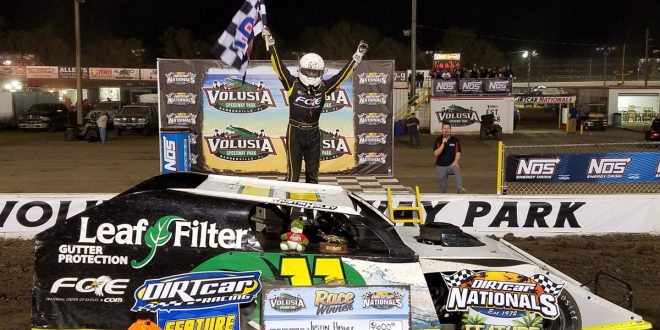 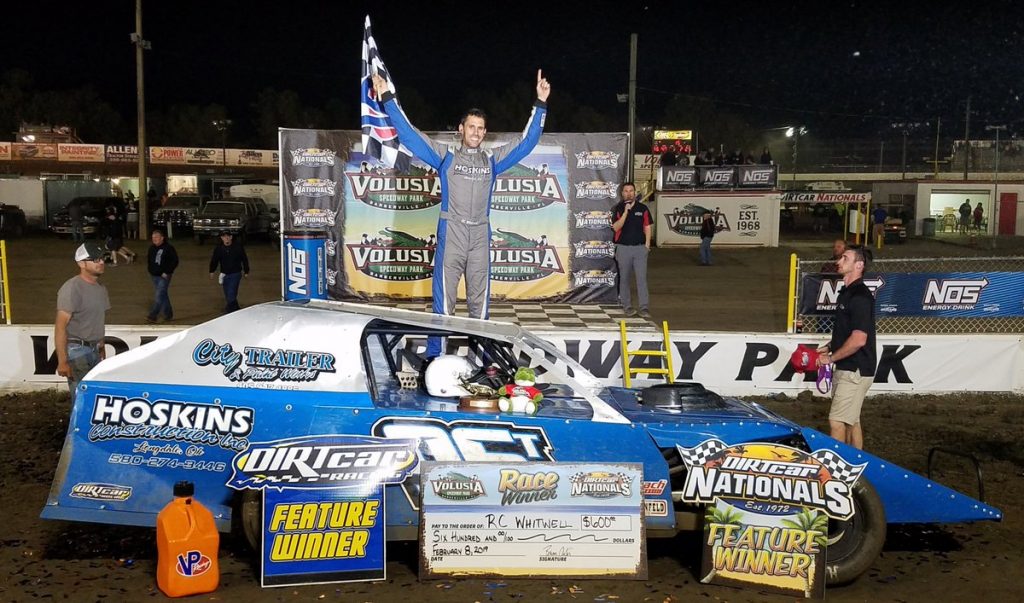 DELEON SPRINGS, FL — Feb. 8, 2019 — One of the most popular nights of the 48th annual DIRTcar Nationals for the DIRTcar UMP Modifieds is the Quad-15s Features Night. Due to the extremely high car counts throughout the week, the Modifieds would race in five Features instead of four as originally scheduled during the fourth night of the DCN at the fast half-mile, high-banked dirt oval of Volusia Speedway Park located west of Daytona Beach. The newly renamed Five-Star 15s would see five first time feature winners take home a coveted Gator trophy.

As for the five winners on the night, the big winner would be R.C. Whitwell who brought home the victory in the fifth and final Five-Star 15 for the top points earners entering the night in the DIRTcar UMP Modifieds. Whitwell, who started on the pole, paced the field early with Lucas Lee, who started in third, passing outside front row starter, Allen Weisser. Whitwell and Lee pulled away from the pack with Whitwell, slowly but surely getting away from Lee who had to deal with a hard-charging David Stremme who started fourth. Stremme got passed Lee briefly, but soon lost the spot back to him.

Lee set his sights on Whitwell and would get close to the race long leader, but couldn’t mount a serious charge as Whitwell, the 34-year-old from Tucson, AZ in his #96 Hoskins Construction / Longhorn Chassis ride stayed out front the entire race while withstanding a final charge from Lee to secure his first career win at Volusia.

“I felt like we took advantage of starting on the pole. But we worked out butts off this week to get to this point. I definitely feel like we earned this tonight, especially with the field that’s here, especially in this feature with all the top points guys” He explained in victory lane after his victory. “I can’t thank Jesse Hoskins and the entire crew, everyone in the shop, for this opportunity. We stayed on the top the whole race. I wasn’t real sure about the bottom so we committed up there for the whole race and it paid off for us.” The feature winner added.

Lee settled for second as Stremme would complete the podium finishers in third. Current DIRTcar Nationals points leader and three-time defending champion in the DIRTcar UMP Modifieds at Volusia, Nick Hoffman finished fourth as Weisser finished fifth to complete the top five. Brian Ruhlman finished sixth over Will Krup from 11th as Tyler Evans who started 15th, Tyler Nicely and Zeke McKenzie, who started 12th, rounded out the top 10. 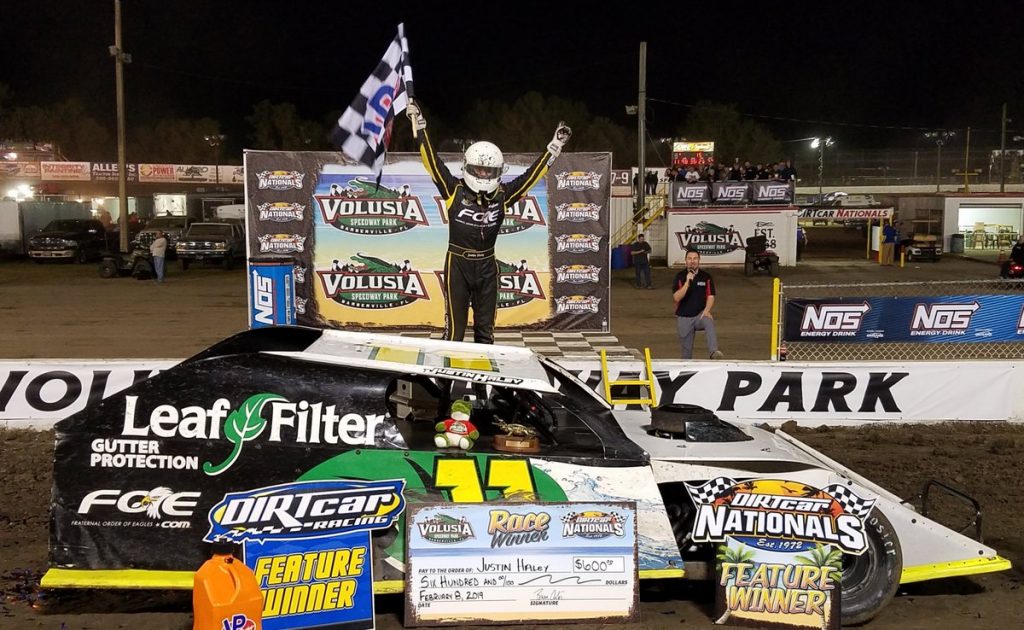 In the fourth feature of the night, Todd Neiheiser and Kenny Wallace started on the front row with Wallace leading the way early. Neiheiser stayed close to the former NASCAR driver and on lap seven, made the pass for the lead. Neiheiser, Wallace and Chase Collins were in a dogfight for the point when 2019 NASCAR Xfinity Series rookie contender for Kaulig Racing, Justin Haley, who was running fourth with five laps to go, fired to the inside of all three drivers to take the lead.

From there, the 19-year-old from Winamac, IN in his #11 Leaf Filter Gutter Protection / Lethal Chassis machine held on for his first career Gator trophy. “This is more important to me than the Xfinity Series or winning a Truck Series race, mainly because this is much harder to do.” Offered Haley after he jubilantly climbed from his car after winning his first Gator. “Even if we win next Saturday at Daytona, this is still bigger. I was started to doubt myself there after we finished third on opening night and then not make the show the next two nights. But God showed us the way and to have faith, rise above the challenges and here we are.” He added.

Shon Flannery wound up in second after starting in 10th ahead of Wallace as Collins and Neiheiser rounded out the top five. Ryan Ayers was sixth ahead of Garret Stewart as Mark Whitener from 18th, Trey Harris and David Wietholder, who started 12th, finished off the final top 10. 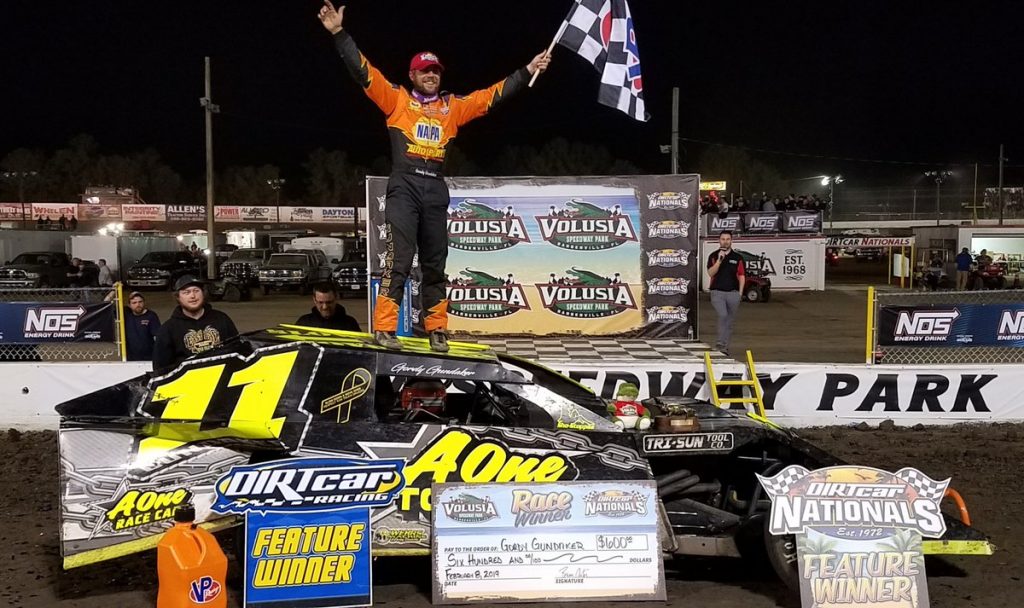 The middle stanza would see Chad Roush and Mike Learman bring the starting field to the green flag, but it was DIRTcar Summer Nationals star, Gordy Gundaker, who started third, charging out to the early race lead. Gundaker set a torrid pace, but it would be Roush, who recoiled, slowly caught back up to Gundaker and passed him back for the lead with four laps to go. As the checkered flag was about to come out, Roush spun his mount coming out of turn four. This set up a Green/White restart with Gundaker back out front and Dylan Stephens, who started 18th, trailing.

On that final restart, Gundaker was able to get away from Stephens and the 26-year-old from St. Charles, MO would hang on to claim his first career Gator Trophy in his #11 AOne Towing / AOne Racecars ride. Stephens settled for second after advancing 16 positions while Paul Miles, Brad Waits, who started 13th and Michael McGee completed the top five. Larry Burkins was sixth over Learman as Brenden Rassel who started 16th was eighth over former ARCA Racing Series star, Joey Miller and Jason Gross, who started 12th were the final top 10. 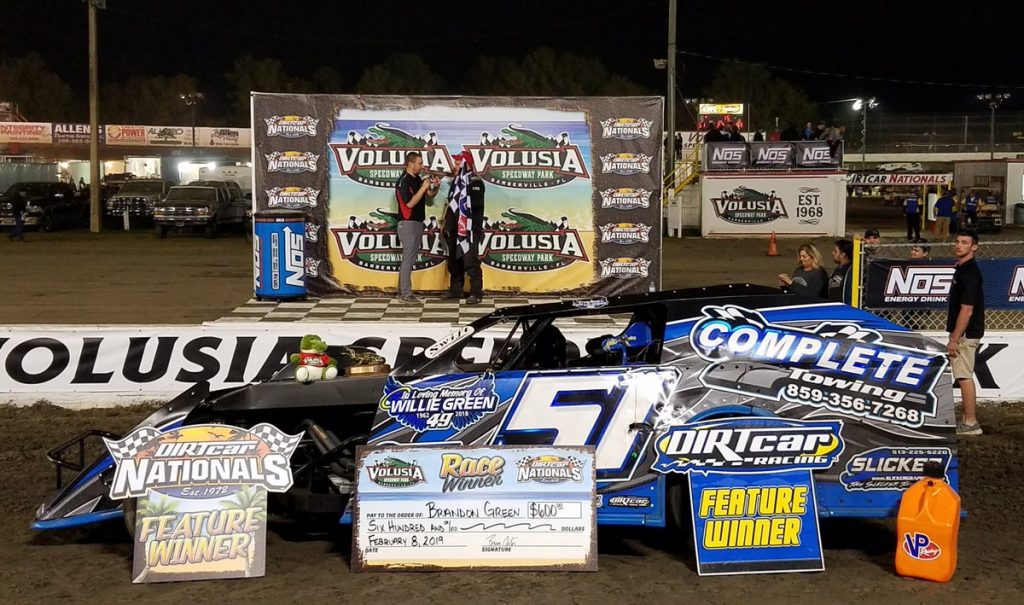 The second Five-Star 15 feature of the evening, held prior to the World of Outlaws NOS Energy Drink Sprint Car Series main event, would see a front row of Brandon Green and Steve Meyer Jr., taking the green flag. Green shot out to the lead early in the race while the rest of the field jockeyed for position behind him. Green, in his #51 Complete Towing / Nemesis Racecars ride was never seriously challenged the entire race and would coast to his first Gator triumph and will take the trophy back home with him to Walton, KY.

Meyer Jr., fell back within the top five during the race, but would rebound to finish second with Josh Harris who started 11th, completed the podium finishers. Austin Holcombe, who started 14th and the youngest driver on the property, 14-year-old Hunt Gossum, started 10th and advanced five spots to finish off the top five. Christopher Smith garnered a sixth place showing ahead of Ryan Fowler, who started 12th as Mark Enk who started 16th, John Baker and Ken Mihalik, who advanced eight spots from 18th, would round out the final top 10. 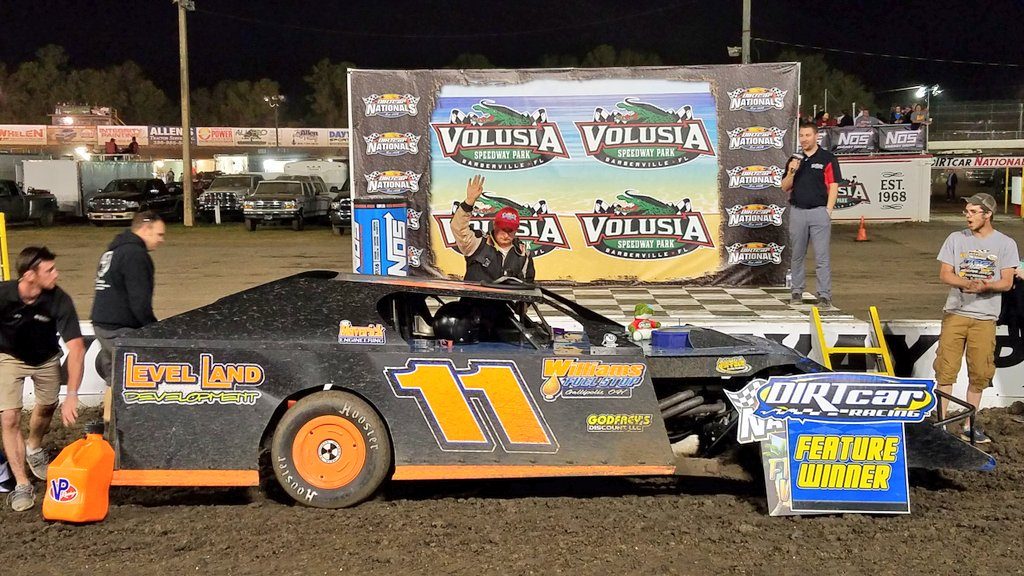 The first Five-Star 15 of the night would have Bobby Miles and Jesse Rupe bring the field down to Chief Starter, David Farney’s green flag. Rupe rocketed out to the early race lead. Rupe was on cruise control until five laps to go when Dale Kelley, who started deep in the field in 16th and Robert Poole mounted a late charge at the race long leader. Rupe was up to the challenge though as the 25-year-old from Sophia, WV staved off the advances of his two pursuers to grab his first career Gator trophy in his #11 Level Land Development / Lightning Chassis entry.

Kelley did move up 14 positions to claim the runner-up spot over Poole while 2018 Eldora Speedway (OH) Track Champion, Jonathan Taylor, from 15th and Will Norris were the top five. Steve Stevenson, who started 19th, grabbed the sixth spot over Miles as Jesse Strange, Tyler Davis from 18th and Jim Shipman, who started in the 17th spot, would be the final top 10.

The World of Outlaws NOS Energy Drink Sprint Car Series will race in their final two nights at Volusia also on Saturday and Sunday to complete Sprint Car Week at the DCN. Late Model Week then begins on Monday with the first of two nights of action for the DIRTcar Super Late Models. The World of Outlaws Morton Buildings Late Model Series take over on the Late Model side starting on Wednesday, February 13 while the day before, the Super DIRTcar Big Block Modified Series take over for the DIRTcar UMP Modifieds starting on Tuesday, February 12.