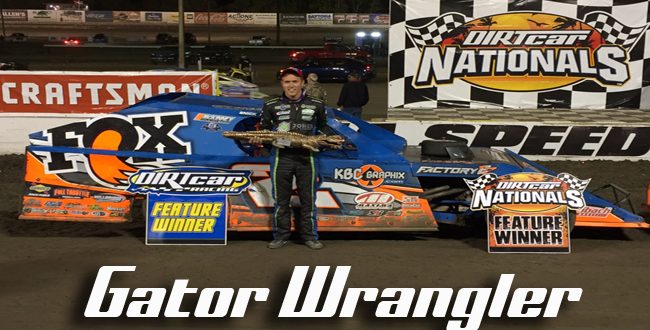 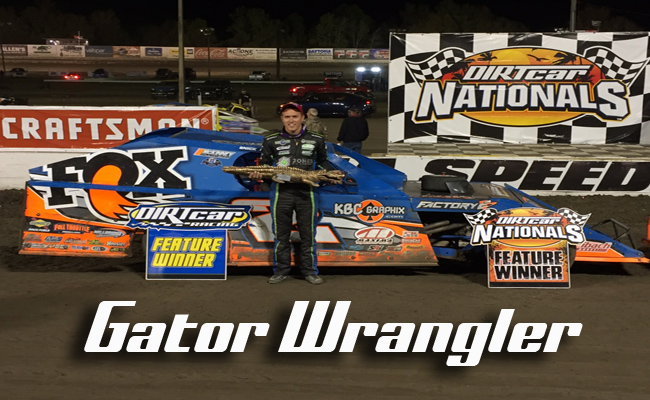 BARBERVILLE, FL – February 22, 2017 – Jacob Hawkins won the battle, but Nick Hoffman won the war and the Big Gator as the overall 2017 UMP Modified DIRTcar Nationals champion at Volusia Speedway Park on Tuesday night. Hawkins, Jonathan Taylor, and JE Stalder all added Gator trophies to their mantles after winning one of three UMP Modified features on night eight of the 46th Annual DIRTcar Nationals.

Triple 15-lap features on the last of eight straight nights of UMP Modified competition were lined up based on DIRTcar Nationals point standings with the bottom third in feature 1, middle third in feature 2 and highest third in the final 15-lap event.

In the final UMP Modified feature of the week, Hawkins of Fairmont, WV went on a tear. He drove the No.13 from the ninth starting spot, passing eight cars in seven laps to take the lead. Hawkins then led the final eight in the same fashion he ran all week – in the top lane, against the cushion – to score his second win of the DIRTcar Nationals.

“That’s my preferred line. I always enjoy it when I can get up there and hustle the car a little bit,” Hawkins said. “I have to congratulate Nick Hoffman on thee [Big Gator] win. It wasn’t for a lack of effort on our part. He definitely was the class of the field all week. I’m glad we were able to pull this last win off.”

Despite Hawkins’ lightning-quick effort, Hoffman of Mooresville, NC turned in a second-place finish. His fourth-straight podium result edged Hawkins by just one point to win the Big Gator for the second straight year.

“We were really dominant last year and to come back this year and do the same thing means a lot,” Hoffman said. “I was a little worried there when he got to second when we had the caution and I was back in sixth. Luckily everybody picked the bottom on the restart and I was able to pick a few of them off right there.”

Stalder of Martins Ferry, Oh. started on the pole for the first 15-lap feature and paced every lap to secure the win. He held off a late surge from Robert Garnes of Ripley, WV who tried to slide to the number one spot in the final two corners.

“It’s great,” Stalder said of his first Volusia win. “I’ve been coming here for a lot of years. I’ve had a lot of bad luck and finally turned it around tonight.”

In the second feature, Taylor of Saltsburg, Pa. launched from the fourth-starting spot to lead the opening lap. Taylor found the outside groove to his liking, banging his right-rear tire against a small cushion. He opened a convincing lead that was eliminated by a red flag when Blake Spalding hit the front stretch wall and flipped on his roof on lap seven. He was uninjured by the incident.

The short break didn’t seem to both Taylor, as he drove away from former NASCAR Camping World Truck Series champion Matt Crafton on the restart. Taylor’s victory was never in doubt as he crossed the finish line 1.9 seconds ahead of Crafton.

“I’m speechless,” Taylor remarked in Victory Lane. “This is absolutely a dream come true, the highlight of my career.”

“We’ve struggled this week, unfortunately, but the last two nights with a little bit of moisture in the track we’ve really learned a lot. We’ve just tried to keep going and I think tonight it finally paid off,” Taylor said.

Chase Collins of Jacksonville, Fla., Garrett Stewart of Leesburg, Fla. and Austin Holcombe of Elm City, NC rounded out the top-five in feature 2.

The Super DIRTcar Series Big-Block Modifieds now takeover as the open-wheel component at the 46th DIRTcar Nationals. The “Beasts of the Northeast” join the DIRTcar Late Models on Wednesday night before the World of Outlaws Craftsman® Late Model Series invades the track for three nights beginning on Thursday. Tickets are available online at www.dirtcar.ticketforce.com or by calling 1-844-DIRT-TIX.

* Lineups were set based on the 2017 DIRTcar Nationals UMP Modified point standings and inverting the top-10 in each race.