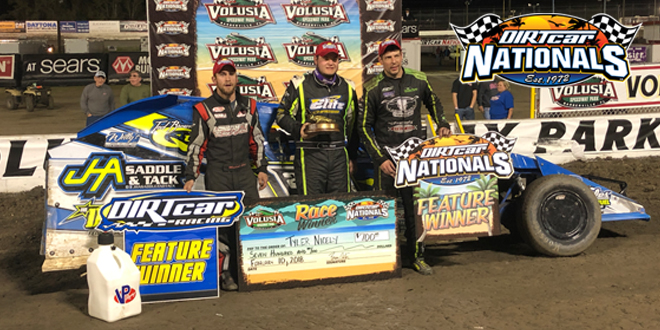 BARBERVILLE, FL — Feb. 10, 2018 — The first of two Gator Qualifying Nights for the DIRTcar UMP Modifieds was on Saturday, February 10th. The 79 teams that have appeared at least once during the 47th Annual DIRTcar Nationals were split up into two groups with half the field racing on the 10th, while the other half get the day off before returning to the track on Sunday, February 11th. In the first of two Big Gator Qualifying Nights to set the field for Monday’s $5,000-to-win finale, Tyler Nicely would go to victory lane and guaranteeing himself a shot at the Big Gator on Monday after scoring his second Gator in two nights

“Once Kyle (Strickler) and I got away from everybody, I figured I was going to have to hold him off, but thought, as long as I’m able to hit my marks each lap, we’d be alright,” Offered the 23-year-old from Owensboro, KY who would also record his third career feature win at Volusia Speedway Park during the DIRTcar Nationals to move him into a five-way tie for eighth all-time in career wins with Craig Thatcher, Dave Hess Jr., Clint Bowyer and Strickler. “Last night felt good, but this one feels really good, to beat the caliber of cars that are here.” The driver of his #25 Elite Chassis ride ended.

Todd Neiheiser and Mike McKinney brought the 24-car field to Chief Starter, Dave Farney’s green flag and it would be McKinney leading the opening lap. Neiheiser would regroup though and charged back out front on the next lap and brought Tyler Nicely and Kyle Strickler, both Quad-15s Feature winners from the night before, with him and the battle was on for the lead. On lap eight, Nicely and Strickler both slipper passed Neiheiser and pulled away from the rest of the pack.

Nicely and Strickler put on a battle of their own while leaving the rest of the field to fend for themselves. As the laps continued to click off, Nicely slowly but surely pulled away from Strickler and started putting lapped traffic between himself and his fellow Gator Feature winner from the night before. In the end, Nicely crossed the stripe first to score the Feature win and more importantly, a guaranteed starting spot in Monday’s $5,000 to win Big Gator finale.

Strickler settled for second for his fifth consecutive top five finish in five starts during the DIRTcar Nationals while Michael Long continues to impress with his best finish of the week in third. Two-time NASCAR Camping World Truck Series Champion, Matt Crafton recorded his best finish of the week in fourth as night number one winner, David Stremme recovered from an incident on lap nine to wrap up the top five. McKinney slipped to sixth while Ryan Ayers, Ray Bollinger, Chase Collins and Ricky Arms completed the top 10 and are guaranteed in Monday’s Big Gator Championship race.

The DIRTcar UMP Modifieds will continued with the Gator Qualifying Nights as the second and final pivotal night of racing will be on Sunday, February 11th, the sixth straight day of racing for the ironmen of the 47th Annual DIRTcar Nationals. The teams that took Saturday off, come back Sunday for their shot at getting into Monday’s $5,000 to win finale. The top 10 finishers from Sunday’s feature will join the top 10 from Saturday’s main event and are locked in to the Big Gator Championship Feature paying $5,000 to win on Monday, February 12th.