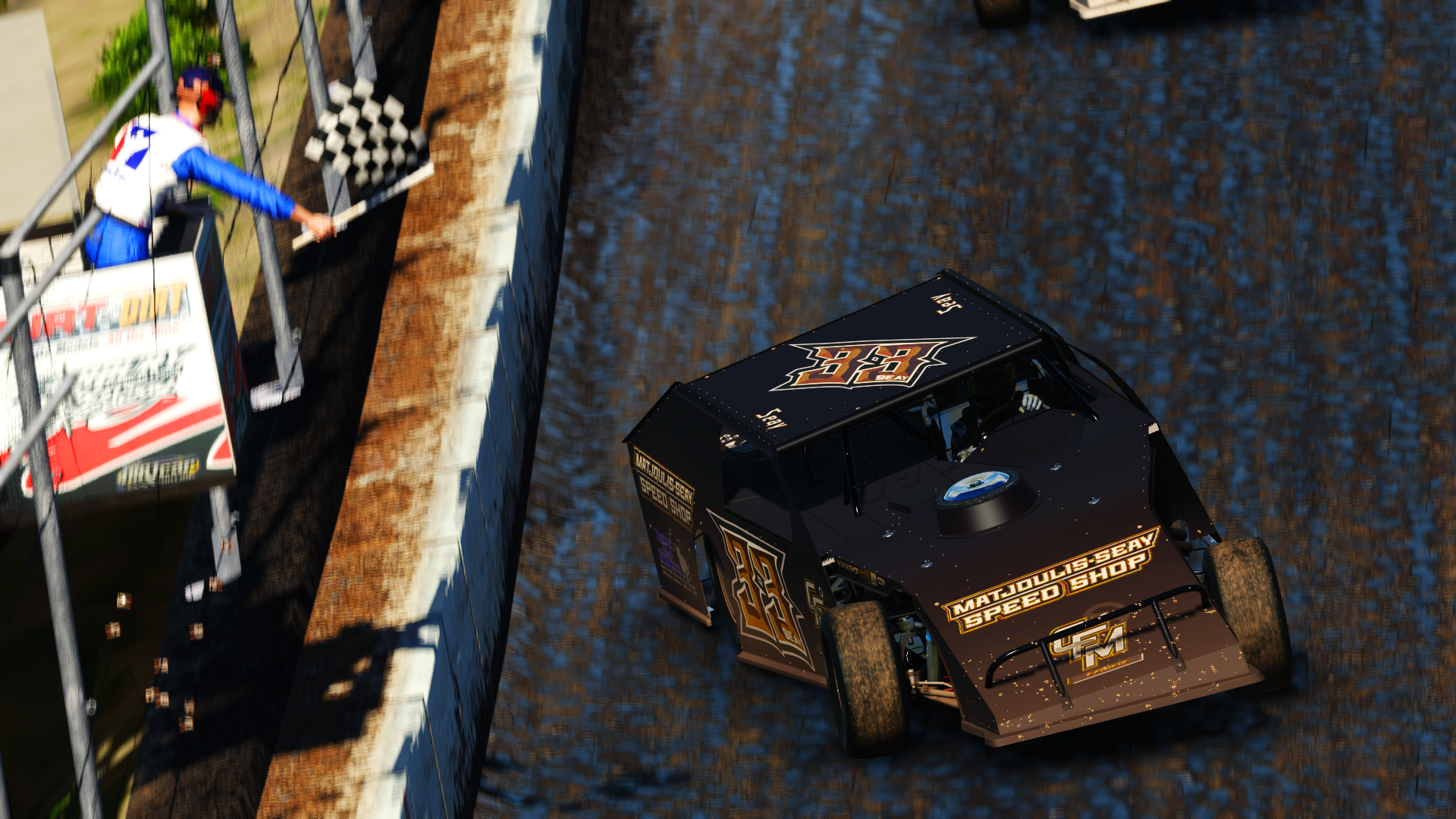 CONCORD, NC – The cream of the DIRTcar eSports crop rose to the top once again in another thrilling Wednesday night of iRacing dirt track action. Evan Seay fended off Blake Matjoulis to win his first Tour race of 2021 while Tyler Jackson won again in the Chevy Performance Street Stock.

The points tightened up at the top of the Tour after 40-laps of hard-fought Summit Racing Equipment UMP Modified Feature racing with the top 5 shuffling up. Meanwhile, Tyler Jackson continued to be the man to beat in the full-fendered Street Stocks adding win number two to his 2021 season total.

Seay has found success behind the wheel of the UMP Modifieds over the last few seasons on the Tour and looks forward to seeing them on the schedule.

“We won Bristol last season and Kokomo the year before in one of these UMP Modifieds,” Seay said. “When it gets slick, it suits my driving style just keeping them straight and not making any mistakes. With these open front tires it’s easy to get into the wall. Getting into other cars on the track can definitely mess you up. We kept it smooth tonight controlling the restarts.” The Summit Racing Equipment UMP Modifieds are one of the most challenging and fun dirt cars on the iRacing simulator, especially on a slick bullring like Fairbury.

“It is easy to overdrive these cars on a track that slick,” Seay noted. “Not making any mistakes was the key tonight. If I didn’t make any mistakes, I felt like it was hard for anyone to get up there and try anything. Any time you throw a slide job on this slick of a track you kill all momentum so I knew to just watch out for those sliders and stay out of the wall.”

“I had the bottom rolling in one and two early,” Matjoulis said. “I got up to second there and we weren’t as good as Evan [Seay] on the top. The bottom kind of went away. My only shot was getting even with him off of two and sliding him into three. The bottom just seemed to go away there in the end. Overall it was a good run and a good race.”

“He got a gap on us on those restarts,” Matjoulis noted. “We just didn’t get the restarts now. But going one and two for our team is as good as it gets for us.” “We had a good night,” Bergeron said. “Qualifying wasn’t too good for us but we gained a few spots in the Heat Race. Started the Feature in eighth and made our way up to the front. On those types of tracks, it goes to the top early and it’s tough to pass.”

NEXT UP: The Tour takes on The Dirt Track at Charlotte in the DIRTcar eSports Drydene Pro Late Models next Wednesday, November 24. Catch all the action on DIRTVision presented by Drydene or join in for yourself with on iRacing.

Tyler Jackson makes it two-for-two in DIRTcar eSports Chevy Performance Street Stock Features in 2021. It’s hard to deny the dominance of Jackson as he has not lost a Heat Race or a Feature yet so far this season. He’s also been fast in qualifying with a third and second overall fastest time in the first two races.

There’s no surprise that Jackson has come out of the box fast but the early wins came as a surprise to the defending DIRTcar eSports champion.

“These are my two worst tracks on the circuit,” Jackson said. “I don’t know if I got better from last year or I am getting lucky. I’m not sure.” Jackson followed pole-sitter Charles Barnes until the halfway point when the race winner knew it was go-time.

“When I was following him [Barnes] I think I showed him the apron line so he chopped the corner really hard there I knew he was going to stay down there and make his car really wide,” Jackson said. “I knew my only shot was to run that second groove.”

The racing was ferocious throughout the field and Jackson was glad to have stayed out in front of the incidents. “Happy that we were able to come out with the win,” Jackson noted. “I was happy running second tonight but when you get the opportunity you gotta go for the win. Charles ran me clean.”

NEXT UP: The big bad DIRTcar eSports Chevy Performance Street Stocks are set to battle next on Wednesday, November 24 at the virtual Limaland Motorsports Park live on DIRTvision presented by Drydene.