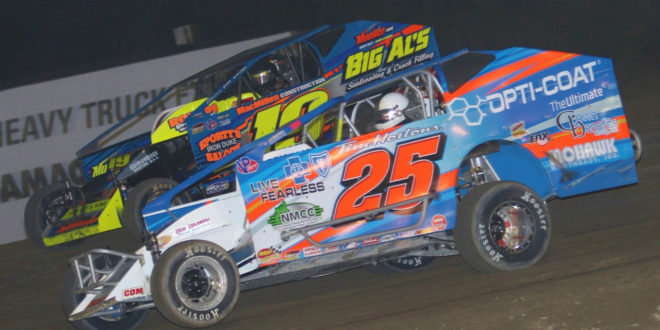 PLATTSBURGH, NY (February 7, 2020) – The new Airborne Speedway management team of Lyle DeVore and Mike Perrotte are pleased to announce the Super DIRTcar Big Block Series will be making their 2020 appearance at the track.

Teams and fans need to mark their calendars for Tuesday, August 18 and be ready for the roar of the big block engines as they come alive at the four-tenths mile dirt oval.

Just two weeks ago it was announced Airborne Speedway would be operating in 2020.  That was followed by an informational meeting, attended by approximately 150 drivers, owners and officials, where they were told there would be several announcements in the near future regarding the schedule and other items.

“We anticipate that not only will those drivers who follow the DIRTcar Series, such as 2019 Series champion Mat Williamson, be on hand, but many others as well.  That would include drivers who run eastern New York tracks such as Albany-Saratoga, Lebanon Valley, Utica-Rome and Fonda,” stated DeVore, “…and we’ve also heard from several drivers from Canada who are interested.”

The August 18th date means the DIRTcar Series drivers will be down to the wire in their point battle for the Super DIRTcar Series title, making the Airborne Speedway race date a vital one for all concerned.

Also in action that night will be the highly competitive DIRTcar Pro Stock class.  Grandstand prices will be $26 for adults and $5 for children under the age of 12.  The grandstand gates will tentatively open at 3 p.m. with racing to begin at 6 p.m.