Pevely, MO — DIRTcar UMP Racing and I-55 Raceway officials announced today the second edition of the DIRTcar UMP Roundup “Party In Pevely” will be postponed to Oct. 14-15-16, 2010.

Soggy conditions would have made it difficult for an event of this magnitude, one that features all eight divisions of DIRTcar UMP Racing, to go off without a hitch. Therefore, officials decided it was best to move the event originally scheduled for March 18-20 to the fall, where the inaugural event lived up to its moniker, the Party in Pevely.

“The Party in Pevely is a special event for us, and we want to make sure that everything about it is done right,” said World Racing Group President Tom Deery. “With the conditions on the grounds this weekend, it just wasn’t going to be possible for the Party to be a party. With an event like this, it’s important for all aspects of the show to function, and for everybody’s sake with the existing conditions we want to wait to make sure that can happen.”

Competitors from across the region including 2009 DIRTcar Late Model National Champion Jason Feger of Bloomington, Ill., I-55 Raceway co-owner Ken Schrader of Fenton, Mo., as well as special guest and NHRA Funny Car standout Cruz Pedregon were scheduled to compete for the prized Belt Buckle Trophy and Silver Roundup Platter that have become synonymous with the DIRTcar Roundup.

Stay current with the DIRTcar Roundup by checking out http://www.partyinpevely.com for schedule, ticket and camping information.

DIRTcar Roundup can also be found on Twitter at http://www.twitter.com/DIRTcarRoundup and Facebook by visiting the World Racing Group events page at http://www.facebook.com/WorldRacing 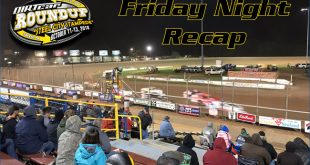