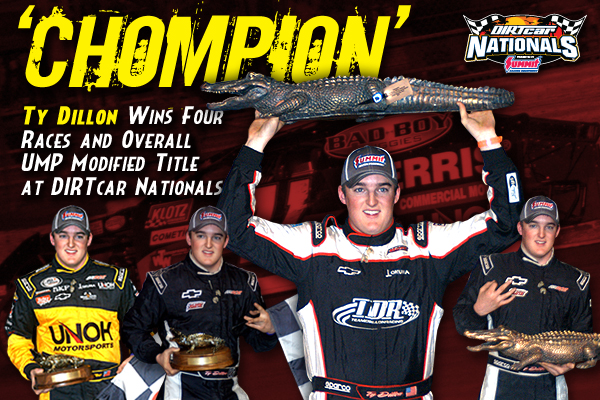 BARBERVILLE, Fla. — Feb. 18, 2014 — Ty Dillon left no question who was the most dominating driver during the UMP Modified portion of this year’s DIRTcar Nationals presented by Summit Racing Equipment by winning for the fourth time during the event on Tuesday night at Volusia Speedway Park.

Dillon, who turns 22 on Feb. 27 and competes regularly in the NASCAR Nationwide Series, had to dig hard to get past leader Kent Robinson in the second of Twin 20 features, but once he was in front it was smooth sailing to the checkered flag. In addition to his four wins, he also had a runner-up finish to help lift him to the DIRTcar UMP Modified championship at the two-week-long event.

“I don’t think I can put words to it,” said Dillon, whose brother, Austin, is on the pole for the Daytona 500. “It’s just been one of those weeks where I felt like I’ve been in a groove in our Team Dillon race cars. They have been so amazing. To come down here and race against 68 DIRTcar UMP Modified drivers, they’re the best across the country, track champions and everything, and win four races, get two big Gator trophies … I’m just very blessed for the opportunity. I hate that it’s over, but it’s good to go out on a good note.”

In the first of the Twin 20s for DIRTcar UMP Modifieds, Joel Ortberg, of Sardinia, Ohio, won for the first time in his career at Volusia.

The DIRTcar Late Models rolled out for the nightcap, and Kenny Pettyjohn was almost at a loss for words after driving away from a star-studded field to capture the 30-lap A-Main. Pettyjohn, 46, was victorious for the first time in more than a decade’s worth of February trips to Volusia.

“Shoot, I can’t believe I’m standing here,” said Pettyjohn, of Millsboro, Del. “I think this tops every race that I ever won in my life. To a lot of these guys this wouldn’t be that big a deal, but for me this took a lifetime.”

Pettyjohn became the first driver from Delaware to win a dirt Late Model feature during the long history of the DIRTcar Nationals by Summit. He achieved the milestone with a powerful performance that saw him swap the lead twice with Rick ‘Boom’ Briggs of Bear Lake, Pa., before gaining command for good on lap three.

The Super DIRTcar Series Big-Block Modifieds roll into Volusia on Wednesday to join the DIRTcar Late Models, with the World of Outlaws Late Models invading the big half-mile on Thursday.