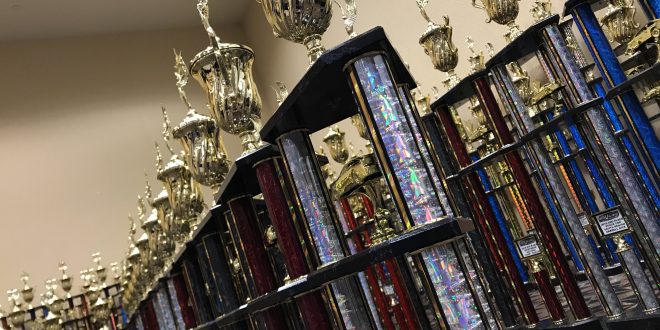 Awards, speeches and more from the DIRTcar awards banquet

SPRINGFIELD, IL – The 2019 DIRTcar Racing season officially came to a close on Saturday night with an evening of reflection, good food and great times at the Springfield Crowne Plaza. The big checks, tall trophies and engraved plaques handed out shone bright on the big stage, as did the drivers, crews, families and friends that come together at the track each and every year to take part in the sport they all love.

The festivities began with the honoring of the youngest drivers under the DIRTcar Racing banner and their national champion, Jerremy Sebens of the Kidz Modz division. After a delightful dinner, emcee Rick Eshelman began the awards presentations to the attending drivers in each participating division, up to second place in final points.

The Engine Builder of the Year Awards were given to Mullins Race Engines in the Modified division and to Durham Racing Engines for Late Models. Rocket Chassis was awarded with the Chassis of the Year Award with 110 total victories across the 2019 season.

Regional champions of each division were also honored according to the list below.

To conclude the evening, the national champions were called to the stage to accept their awards and make their speeches.

After another incredible season behind the wheel of the Bob Cullen Racing #3s Rocket Chassis XR1 that saw an impressive 13 wins on the national scale and seven on the DIRTcar Summer Nationals tour, Brian Shirley collected the 2019 DIRTcar Late Model National Championship, and the Summer Nationals crown for the second year in-a-row.

The Chatham, IL-driver was unable to attend the ceremony on Saturday night due to his other commitments, but left a video message for all of those in the banquet hall.

“I’d like to thank Tom Deery, Brian Carter, Sam Driggers and everybody at DIRTcar for what they do. Also a huge thank-you to Bob and Lisa Cullen, Thomas Express, Kids Castle, J&J Adventures, Rocket Chassis, Andy Durham and everybody that helps me on this car,” Shirley said.

Mooresville, NC-native Nick Hoffman also took to the stage to accept both of his championship awards, worth $25,000 total for his efforts in the DIRTcar UMP Modified national ranks and on the Summit Racing Equipment Modified Nationals tour. In his speech, Hoffman rattled-off a few stats he compiled that best defined his success over the season – 24 wins in eight different states at 20 different racetracks for a total of 50 races. In sum, a year’s worth of domination.

“I’ve been fortunate enough to win quite a few races in the Modified deal, and this was one of the last straws i feel like i needed to go get to really put my name on the map of what I’ve done in a Modified,” Hoffman said.

As for 2020, Hoffman will be stepping his game up just a bit, looking for more time in the big DIRTcar Late Model ride he’s occasionally spotted in.

“I still feel like I’m young enough to do a full-time deal in the coming years,” Hoffman said. “The Modified is obviously running running really well and making money, so I want to keep racing it on the nights I’m not in a Late Model. I’ll run a part-time schedule in both.”

DIRTcar Racing would like to thank all of its partners that made the 2019 racing season a huge success! 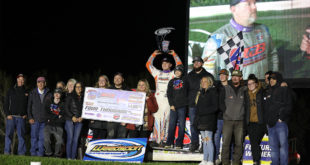